The difference between chopped and sliced brisket is that the chopped version is cut in small square pieces while the sliced is simply cut vertically or slanted in uniform slices.

When serving raw or cooked brisket, you have several options for cutting it. The most common is sliced and chopped ​brisket. So, chopped vs sliced brisket, which is the way to go?

Brisket sandwiches and pastramis are my favorite recipes to make due to their complex and distinctive flavor as well as their tenderness. So I often run into the question of whether to slice or chop, myself. So, keep reading and I'll tell you whether it's better to use chopped or sliced brisket in your recipes.

Chopped and Sliced Brisket: What Cut of Brisket Is Best?

Well, I really don't know why the chopped vs sliced brisket battle exists and why this is worth being in a comparison post. At best, we can only differentiate and not compare what tastes or looks better. It depends on how you serve it!

The taste depends on the recipe, method of cooking, the pitmaster's skills, and the intended serving. Do you like brisket sandwich? Then it is best chopped. However, if you are serving it at a formal dinner, you'll be better off with the sliced version.

Chopped briskets are used for hamburgers, meatloaf, bolognese sauce, meatballs, kofta, and other dishes where you need small ground dishes. Meanwhile, the sliced version is best used for corned beef or pastrami.

So, the answer is in the recipe since chopped briskets, for example, are not suitable for pastrami. The sliced version wouldn't make hamburgers look like real burgers.

What Is Beef Brisket?

This is a portion of cow in the middle of the two front legs after the underside of the neck.

The beef brisket, however, is a challenging cut. It is a heavily used muscle that carries the body weight and is therefore very robust. The more a muscle is used, the tougher it is. The adult cow it's taken from must be at least two years.

Brisket has two layers or sections known as the flat and point. Both muscles are separated by a layer of fat called the fat cap. This runs through the entire brisket.

The point cut is the much smaller part of the brisket and sits on top of the flat. If the meat cut still has all the muscle strands mentioned, it is also called a full-packer brisket.

The brisket itself, boneless but with a thick layer of fat, must cook on the grill for several hours until the internal temperature reaches 195 degrees Fahrenheit.

However, for those in a hurry, there is also a smoked version, in which the brisket is already cooked and only needs to be heated.

What Is Sliced Brisket?

Sliced brisket is a type of brisket which can be smoked as a whole packer with the flat and point. When the whole brisket is cool, it's cut from top to bottom across the grain in uniform slices.

Unlike chopped meat, there is a rule for cutting the meat to make it tender. The sliced briskets are flat, thin, and long. It is not cut like beef is cut generally. Instead, it is cut with a serrated knife or bread knife like you're sawing.

What Is Chopped Brisket?

Chopped briskets are a kind of minced meat that is finely cut and has only a small amount of fat. The good thing is it can be crafted in several ways. Chopped, minced, or ground meat is best made from beef with muscle, i.e., mainly from the pieces of meat from the hips, legs, shoulders, and back. Therefore, meat chopping is perfect with briskets because of its toughness.

In the past, the whole brisket was placed on a wooden board, and very fine slices were scraped off the meat from the board with a very sharp knife. Depending on the production and further processing, it is referred to as minced meat, hash, or tartare.

Editor's Tip: Today's preparation method is to mince it through a meat grinder. This machine presses chopped pieces of meat through a fixed perforated disc with the help of a worm-shaped drive shaft and a rotating knife disc.

How To Slice Brisket?

Step 1: Get the needed items

To slice brisket, you will need a bread or serrated knife as cutting is done in a saw-like cutting. Then, you'll need a wood platter or cutting board on which the meat will be cut. 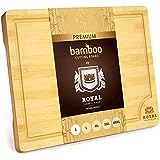 Organic Bamboo Cutting Board with Juice...

I've seen several pitmasters place a piece of towel under the cutting board to prevent it from shifting as you cut back and forth.

Step 2: Place your meat on a cutting board

Now, to the main business. Take out the brisket and place it on the wood platter. How much brisket you need depends on your recipe and needs. Ensure it is cool. If you don't have the time, make sure it has cooled for at least 20 minutes after taking it out from the heat.

Let it rest for another 10 minutes in an aluminum-covered dish. This will allow the juices to soak up the inside. If they are large pieces, you can turn them over so that these juices are distributed evenly.

Before cutting into thin portions, cut off some of the fat. Fat is also an important flavor carrier. The art is in not removing too much of it.

Take a serrated knife and slice like you are sawing wood. Slice the meat to your desired thickness and vertically on a straight line ensuring you're cutting perpendicular to the fibers.

The first golden rule, if you want to cook before slicing, is that the meat must not be cooked past a specific internal temperature. Otherwise, it won't slice well. Being a tough meat from a muscle-filled part of the cow, the brisket must be cooked low and slow to get tender.

If it's cooked too fast, say above 195 degrees Fahrenheit internally, the brisket will fall apart while slicing. It may not get tender either.

The second golden rule when slicing brisket is to always cut brisket across the grain. Before you put the knife on, take a good look at the piece of meat.

Observe how the fibers run. You can tell the direction of the fibers by the stripes running through the meat. But you can also feel them when you touch them.

Although it looks easier to cut along the grain, never do it that way. If you ignore this rule and cut along the grain, the meat will be tough. No matter how it is prepared, the longitudinal brisket fibers will "spring" between the teeth when chewing and can only be bitten through with effort.

On the other hand, if you cut the meat across the grain, the finished piece will only consist of short fibers. This helps cook the meat faster. The short fibers are also easier to cut through when chewing. The meat will also be tender and juicy.

It's often easier to slice when the brisket has burnt ends. So, ensure this while smoking the meat. You may want to try the Kansas barbecue sauce recipe to get a good bark on the brisket.

How to Chop Brisket?

Examine the meat and look for pieces of cartilage and connective tissue that might still be attached to it. Cut off all these parts with a sharp butcher knife and discard them. If you don't remove them, they will appear in the brisket when you grind them.

Leave some fat on top. Good chopped and ground brisket contains fat. So, don't remove all the fat when removing the unwanted parts.

If you want more lean ground brisket, you can remove some of it, but the meat will chop and be cooked properly if you leave some fat.

Cut them into cubes 3 to 5 cm wide with the knife. The pieces don't have to be the same size or perfectly cubic. Start with a dice shape and a width of 3 to 5 cm.

Arrange the pieces you have cut out on a baking sheet in a single layer. Put the plate in the freezer for about 30 minutes or an hour, so the flesh becomes firmer without being frozen and solid.

Step 4: Put the grinder in the refrigerator too

Also, put the food processor bowl and blade in the freezer to cool them. Chilling the brisket in the freezer allows it to be minced more cleanly without the fat melting. The same goes for the parts of the grinder. The cut will be cleaner if the blade and the bowl are cold.

Step 5: Chop in the grinder

Put the briskets in the grinder. Chop a small amount at a time; a handful or two of flesh. The bowl should not be overfilled for the food processor to work appropriately and chop evenly.

The precise amount you can chop depends on the size of the device.

Blend in short strokes until it is completely chopped. If the device has a pulse function, use that rather than one that keeps it running non-stop. Mince the briskets in strokes of a few seconds.

Check its consistency after three or four strokes. It shouldn't be too minced. If it feels like dough, you've been blending it too long.

I advise that you use the point cuts for making chopped briskets. The chopped point cuts have extra fats than the flat cuts which are leaner.

Sliced and chopped brisket are some of the most common ways to serve cooked brisket. Now you know the difference from my chopped vs sliced brisket analysis. Chopped briskets are cut into pieces with a butcher's knife. Some often send the chopped briskets into the grinder to be minced further for use in brisket sandwiches or Bolognese sauce.

Meanwhile, sliced briskets are done with a different knife as it's sliced. While the sliced ones are good for pastrami and corned beef, the chopped versions are best for beginners.

Therefore, there's no winner here in this chopped vs sliced brisket comparison. The best cut for you is determined by the recipe you're making.

By Kristy J. Norton
I'm Kristy – a chef and connoisseur of all things BBQ! You can find me either in my kitchen (or someone else's) or at a big outdoor barbecue surrounded by friends and family. In both my professional and personal life I’ve picked up more than a few tips and tricks for turning out delicious food. I consider it a privilege to share it with others!
Affiliate links / Images from Amazon Product Advertising API. CatHead's BBQ is a participant in the Amazon Services LLC Associates Program, an affiliate advertising program designed to provide a means for website owners to earn advertising fees by advertising and linking to amazon (.com, .co.uk, .ca etc) and any other website that may be affiliated with Amazon Service LLC Associates Program. As an Amazon Associate I earn from qualifying purchases.
More like this ...

Kabob vs Kebab: What is the Difference?

My Ground Beef Smells Like Eggs | Can I Still Eat It?

Does Beef Broth Go Bad? A Timeline of Spoilage

How Much Corned Beef Per Person: A Number's Game

What to Serve with Beef Tenderloin: The 23 Ultimate Choices