Hickory vs Mesquite | Which Works Best for BBQ?

What’s the difference between hickory vs mesquite smoking wood and the flavors they produce? I’ve been seeing this question pop up a lot lately. However, the answer depends on your taste and what you want to smoke or grill. For most of us cooks and backyard barbecue warriors, we know mesquite wood has a strong flavor profile. It is often used for red meat like beef, especially brisket. Hickory on the other hand is mildly intense in flavor. It’s a versatile type of wood that goes well with chicken or beef.

Still, I know it’s really hard to tell the difference between the different smoking woods like hickory and mesquite. When we dive further feel in the hickory vs mesquite wood comparison, you’ll find out what works best for you and your purpose.

Differences Between Hickory vs Mesquite: A Side-by-side Comparison 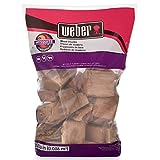 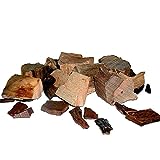 It is important to understand that both hickory and mesquite wood burn almost exactly the same way. So when you decide to switch from one to the other, you don’t need to alter your cooking time or method.

The second thing to remember: If you’re cooking for a group, only you will be able to note the differences between hickory and mesquite. Only experienced grill masters can tell what woods you used. Some will notice the intense smoky notes of mesquite. Although the distinctive nutty taste of hickory won’t matter for a few.

Which Is Better: Hickory or Mesquite?

Mesquite wood chips are more effective for smoking meat because the wood burns a little quicker and stronger. It burns fast and smokes a lot, giving your meats intense smoke and bark.

Meanwhile, hickory wood is more versatile than mesquite and it tastes better. Hickory can be used with various types of meat and is easily integrated with other woods such as oak to create amazingly spicy flavor profiles.

On the other hand, mesquite wood chips and logs are only great for certain recipes like dark meats. However, it’s probably too strong for smoking ribs or pork shoulder.

If you’re having a hard time deciding which to choose, you can choose both. Yes, you can mix hickory with mesquite. Blending intense woods with fruity woods will help decrease the intensity. I recommend trying them out individually before combining them.

Everything About Mesquite, the Wood With a Distinctive Color

Mesquite is from deciduous trees found in North America. Mesquite tree woods are also used to smoke food or to make coals for grilling meats.

Right from time before smoking got so popular mesquite woods were used for centuries to create furniture. The products from the tree are edible and can even be made into flour.

Currently, this ingredient is used for barbecues mainly because of its easy availability and distinctive flavor. Most smokers prefer eating foods made from mesquite wood because the smell gives off spiciness and complements meat like beef rib.

Mesquite woods come from South and Central America including Mexico. Texas Almanac reports that 76% of mesquite trees that grow in the US are found in Texas.

Mesquite trees are ecological. They fix nitrogen in the soil and can eliminate the need for fertilizer. This high density of nitrogen is a good source of ignition in the wood when burning. This is why you will see that the wood burns more quickly. On the other hand, it is hard, long-lasting, and considered one of the most stable hardwoods in the world.

Everything About Hickory, the Versatile Smoking Wood

Hickory wood comes from trees in the walnut family. It is a dense hardwood.  It brings with it a mildly intense aroma when burned to smoke meat and fish.

It is a medium smokey wood with an unique flavor note when combined with oak and provides an extremely smoky taste to meals.

As with any hardwood, it also has an unusual flavor which some people believe has an unpleasant acrid, or mildew smell. This is why it is frequently combined with oak.

Almost all foods can be smoked with hickory chips or logs. The great thing about hickory smoking chips is that nutty and sweet smell and taste.

Hickory wood is a naturally burning wood type, providing excellent flexibility for grill masters. This is one of the best for new barbecue smokers since it works great with many dishes.

Hickory is quite common throughout North America as well as South America. It’s also found in Southeast Asia.

Hickories are popular throughout most of the southern part of the US and the Midwest. The woods are unique due to their versatility. They are excellent for making dishes that need to be smoked for longer.

Aside from being used as a smoking fuel, hickory is commonly used for seasoning and curing meats, which tells a lot about its high versatility.

What Else Is Important when Smoking With Wood?

In addition to using the right type of wood, the condition of the wood and the correct handling of it are important for safe barbecuing with wood. Next, I’ll show you what you should consider while choosing and using these woods for smoking.

For effective food smoking, you need dry (not fresh) and clean grilling wood. The residual moisture should be a maximum of 20 percent. It must not show any sign of fungus or other contamination. Smoking wood must not have chemical treatments.

The sizes of the wood chips or wood logs are also important. Log length of 8 inches and a thickness of around 2 to 3 inches are great for even burning and good temperature development. For wood chunks, the ideal dimensions are 1 by 1 inch in length and width. The thickness is typically 1.4 inches.

Would you like to make your grilling as low-emission as possible? Then you should only place the food on the grill when the wood fire has burned down.

Don’t place your meats anywhere direct flame can be seen. Grilling takes place over the embers, not over a wood fire.

The reason: wood binds pollutants that are released when burned. There are over 100 hazardous chemicals released from wood smoke and they can be carcinogenic.

Among other things, substances such as carbon dioxide, carbon monoxide, formaldehyde, acids, and tar are released while smoking wood. If you grill directly over a wood fire, you’ll have nothing but polluted grilled food and a bitter aftertaste. If you grill over the embers, most of the pollutants are already burned out.

Mesquite typically has a big, bold, intense, and earthy flavor. It burns quickly and hot produces plenty of smoke and is rich in savory flavor.

Hickory is known for its mild, intense, savory, and hearty flavor. Hickory is good for meats like large sliced rib cuts and pork shoulder, for white meats, and even fish.

Is Mesquite or Hickory Better for Steak?

Steaks, as well as other meat varieties, can go well with hickory, the versatile wood. However, mesquite is better than hickory for steaks like beef brisket. I feel the darker your meat is, the better mesquite would be for cooking.

I’ve compared and introduced each wood type to show you the best dishes you can use them in. Again, hickory imparts a medium-high flavor to meats. Mesquite has a strong flavor that can bind meat. If you fall in love with both kinds of wood, you can mix hickory and mesquite for your smoking sessions.

By Kristy J. Norton
I'm Kristy – a chef and connoisseur of all things BBQ! You can find me either in my kitchen (or someone else's) or at a big outdoor barbecue surrounded by friends and family. In both my professional and personal life I’ve picked up more than a few tips and tricks for turning out delicious food. I consider it a privilege to share it with others!
Affiliate links / Images from Amazon Product Advertising API. CatHead's BBQ is a participant in the Amazon Services LLC Associates Program, an affiliate advertising program designed to provide a means for website owners to earn advertising fees by advertising and linking to amazon (.com, .co.uk, .ca etc) and any other website that may be affiliated with Amazon Service LLC Associates Program. As an Amazon Associate I earn from qualifying purchases.
More like this ...

What is Silverskin on Meat? Easy Ways to Remove It

How Often to Add Wood Chips to Electric Smoker? 4 Things to Consider

How to Use Wood Chips on a Charcoal Grill? 3 Simple Steps

How to Reheat a Burger? The 5 Ways of Getting It Done

The Ultimate Porter Road Review: Going All In